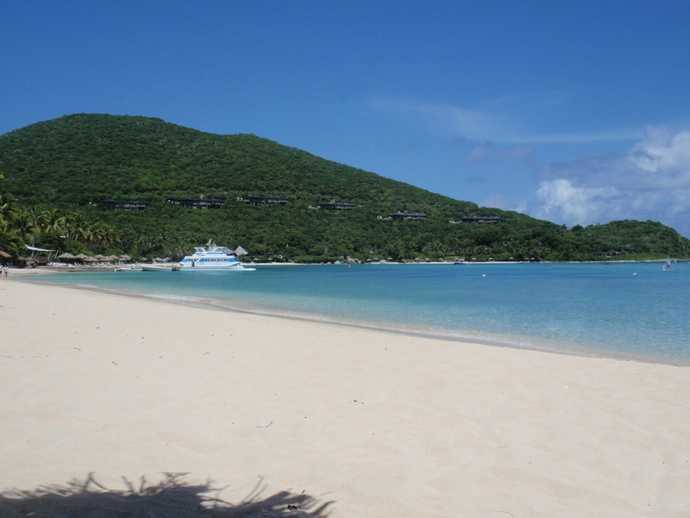 I have been to the Caribbean twice in my life so far. Hopefully there will be many more times in my future.

One of the stories that I love to tell is about my second trip to Little Dix Bay, Virgin Gorda, BVI.

My wife and I went here for our honeymoon. As did my parents, 33 years ago. Little Dix Bay is a resort on the western side of Virgin Gorda in the British Virgin Islands. It was started in 1964 by one of the Rockefeller offspring, and has been an amazing getaway ever since. I haven’t been anywhere else in the Caribbean, but I don’t know how it could get better.

In July of 2011, Katherine and I took our second trip to Little Dix Bay. This time, we were parents, “grown up” and a little more experienced in the world. So naturally, we were a little more comfortable with travelling than we had been the first time we went there. We were much more relaxed as far as venturing out of the resort was concerned. I had about as much trouble talking to people as I ever have (Ba-dum-bum-tiss). But this time we were ready to experience a little more than the resort had to offer.

Before dinner one night, we decided we would catch a shuttle into Spanish Town to buy some T-shirts for the kids. We caught a taxi at the resort, which was nothing more than an f150 with benches and an awning welded into the bed, and rode down into town to see what was happening. Upon arriving at the parking lot in the middle of the only shopping center, we were told by our driver to just “Ask for Mike”, when we were ready to go back to the resort. “Where do I ‘Ask for Mike’?” I asked, it’s not like there was a taxi stand or somewhere official to find this guy. “Anywhere” he, responded, waving his hand over everyone I could see…

I figured we would be fine.

I watched the scenery riding down and knew if we needed to, we could walk back to where we belonged. So I shrugged, winked at my wife and we walked off to do our shopping. It turned out, that of the small amount of shops that were present in Spanish Town. Everything closed at 5 that evening, so we weren’t able to do any shopping. Having only just been dropped off, and decided that we should see if there was anything else to do, rather than just find Mike and return to the resort.

We pulled up some stools at the marina-side bar. And ordered a red stripe and a carib beer. Sitting there we watched some high school students, most likely in port on a semester at sea, scrambling to charge their cell phones and call home. “The island is beautiful, but the town is kind of shitty.” We overheard one of the mini-kardashians say. It must be a shame to not recognize whats truly amazing because you’ve been catered to all of your life…

The bartender was a middle aged islander. And I laughed when she asked one of the SAS students if he was “forgetting someting?” when he slapped his money on the bar and ordered a virgin pina colada, without saying “please”. A few moments later, she looked up and told us, “Uh, oh. Here he comes…“. As a small, leathery hispanic man long curly grey hair hopped up the steps to be bar. “Who?” I asked. “Jesus.” She replied smiling. Jesus sat down next to us, and ordered a red stripe.

I started a conversation with him, and was so pleased to find out that he was a yacht captain for a wealthy Mexican man. For 30 years, he lived on and maintained the vessel. Sailing around the Carribbean, drinking at the marina side bars, hunting wild cows occasionally on Anegada, diving for langoustes, and then loading up with supplies, picking up his boss and family at whatever port they desired, and sailing them around the Carribbean for as long as they wished.

Jesus had such great stories, and had seen so much change in the many years that he had been a boat captain. Semester at sea students, and tourists like me couldn’t grasp the transition of rural tropical islands, to tourism spots. No matter how much they tried to maintain their originality.

He bought us another beer, and then he went off, back to tend to his boat, soak up some more salt and sun and prepare for his next sailing adventure…and I was able to truthfully say, I’ve had a beer with Jesus.